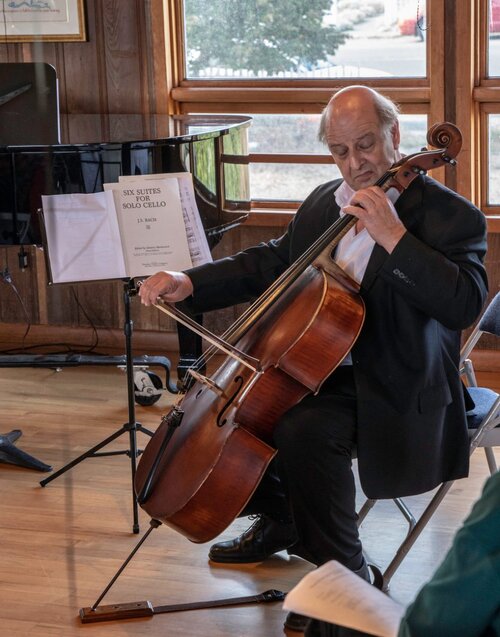 Schuchmann is known for the beauty and depth of his musical interpretation as a performing soloist as well as chamber musician. He is greatly sought after as a chamber music coach of young musicians and adult amateurs. He was for many years the director of the Mendocino Music Festival’s Young Musician’s Scholarship program. A gifted teacher, Mr. Schuchmann has taught at the University of California at Berkeley and also CSU Chico. He currently teaches string technique classes, directs the Berkeley and Marin chamber music workshops. He is the artistic director of the Palomarin Chamber Music Foundation and has recently inaugurated an all-cello workshop (“Cello Heaven”) in Berkeley, California. He has been a member of the faculty of the San Domenico High School Conservatory of Music and coaches chamber music at the CalCap Chamber Music Workshop in Sacramento and at the Chamber Musicians of Northern California, (CMNC).

About Burke Schuchmann.  Schuchmann began his cello studies with August Heilbron at the age of 14. He later studied in London, England with William Pleeth for five years, where he made his debut at the age of 19. He also studied for extended periods with Margaret Rowell and Colin Hampton. After his studies in England, he became principal cellist and soloist with the Salzburger Solisten in Austria. He has performed extensively as a soloist and chamber musician.